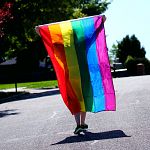 Max Cohen (Dip Couns MBACP), Founder and Director of It’s All About You Wellbeing, is a counsellor specialising in working with LGBTQ+ clients in the mainly rural area of South West England and a trans man. He works on-line and face-to-face at The Practice Rooms in Exeter. He also delivers on-line LGBTQ+ training for counsellors “Working Well with LGBTQ+ clients” and holds monthly LGBTQ+ networking meetings for counsellors.

Pride and shame: two end points on a spectrum of acceptance of oneself regarding gender identity and sexual orientation.

In an era where more people are living openly as LGBTQ+, why does my organisation, It’s All About You Wellbeing, list a directory of LGBTQ+ affirmative counsellors and wellbeing practitioners?

Clients accessing counselling have voiced that they don’t want to be the one educating the counsellor. Counsellors and wellbeing practitioners who are not aware of LGBTQ+ issues may fear getting it wrong particularly worrying about the use of pronouns and not knowing what the letters in LGBTQ+ stand for but I’d like to invite them to engage in relevant CPD, particularly run by people with lived experience.

Minority stress and internalised phobia are terms that describe factors that can lead to chronic health issues and an internal sense of shame for minority groups such as LGBT+ communities that are stigmatised and discriminated against.

The work I do with clients, using an integrative approach, is to enable them to view the parts of themselves that may hold pain, fear and shame and to work towards feeling a sense of acceptance and pride in their identity and live their own lives that have meaning for them.

The pilot work I’ve done with small groups of LGBT+ people feeling some degree of internalised shame regarding their gender identity and/or sexual orientation by developing compassionate mindfulness skills showed that most group members felt their emotional wellbeing increased as well as valuing the LGBTQ+ affirmative space.  “I’m more open and have been able to say, ‘this is me’”. Some of the group had previously felt unable to access Pride events as they felt they would not fit in.

Although there have been many steps forward, for example, same sex marriage and self-declared gender change for adults and young people in Ireland, other hard won LGBTQ+ rights are being threatened.

The LGBTQ+ National Survey had over 100,000 respondents and found a mass of inequalities with accessing health services, in education, employment and legal barriers for transgender people.

In response to this the LGBT Action Plan 2018  outlined firm commitments to tackle some of the biggest issues facing LGBT people. One of which is to “bring forward proposals to end the practice of conversion therapy in the UK. Conversion therapy currently termed ‘gay conversion therapy’ in the media but relates to gender identity too. A number of organisations including the BACP have issued a Memorandum of Understanding to ban it

COVID 19 has exacerbated domestic abuse and forced people to live with families who are phobic or abusive without escape to their ‘tribes’. It has also re-traumatised gay men and others who lived through the rise of HIV/AIDS in the 80s.

As well as increased hate incidents targeted towards LGBT+ people, arguments highlighted in the media by anti-trans feminists have focussed on the validity of trans people's gender, where they view trans women as sexual predators who are a threat to women in women-only spaces. This centres on reforms to the Gender Recognition Act which could mean a simpler and less intrusive process for trans people to change their legal gender status. However, there have been suggestions by the select Committee for Women and Equality that trans people’s use of single sex facilities may be changed which would roll back the current laws under the Equality Act. Also interventions helping young gender diverse people have come under fire. The proposals will become clearer by the end of July.

As it’s now the end of June, the UK’s Pride month, I’ve been reflecting on this year’s events with the added complications of the coronavirus pandemic. There have been cancellations of Pride events across the country and the creation of alternative online events instead. Pride events have different meanings for each person. For some it is seen as a celebration, for others it is recognition of the good and bad points from the previous year and a time to set agendas for campaigns for the year ahead. It is also seen as a reaching out to people who need support and a public display of the diversity of LGBTQ+ people. Pride in all its forms, such UK Black Pride, Trans Pride and Bi Pride remain focal points to many LGBTQ+ people.

The first Pride event was held 50 years ago as a parade to mark the Stonewall Rebellion. It was led by Marsha P Johnson and Sylvia Rivera two trans women and activists who rallied their community to stand up to police raids on Stonewall Inn, a queer pub in New York City in 1969.

Globally, however, there remains a lot to still campaign about. This year’s 50th year anniversary march in New York was marred by police pepper spraying and using batons at the peaceful gathering. Pride marches are being targeted and attacked in Poland and politicians have declared LGBT+ people "enemies of the state.

When working with LGBTQ+ clients it is important to listen to the voice of the person behind the pronoun and to see beyond the flag.