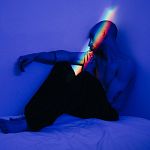 Did you feel touch deprived during the lockdown?  Many people I know reported how strange it felt not to be hugging, touching and kissing each other. It is really no surprise since touching each other is one of the most basic human instincts.

In a now famous experiment from the 1960s, Harry Harlow removed infant monkeys from their mothers. He found that although kept warm and fed, they failed to thrive and developed disturbing destructive social behaviour. He gave them surrogate mothers in the form of wire frames covered with terry cloth and noted how they clung to these ‘mothers’. He speculated it was because the infants' touch receptors were stimulated to feel a similar security to that which would be produced by the touch of a real mother. It has now been widely reported how infants brought up in the orphanages of old, without love and nurturing touch, had a 30-40% higher mortality rate than infants who had caring homes. The deduction was that humans can even die from lack of touch (1). Attachment theory has shown one of the key predictors of secure attachment is, the quality and quantity of touch we receive as infants.

In relational body psychotherapy, we imagine psychotherapy as an undertaking between two embodied individuals with an agenda to explore how our body/minds have built up defensive mechanisms to adapt to difficult circumstances. These may have served us then, but now they have become like shackles keeping us from leading satisfying nourishing lives.  We explore more adaptive ways of dealing with life’s ups and downs.

The starting point is that humans are born with abundant life energy which becomes subverted in order to survive painful and difficult circumstances. We develop body armour, which may be in the form of very rigid or alternatively very resigned systems in the body. The autonomic nervous system plays a key role in the defensive fight flight or freeze mechanisms. It influences all the key systems in the body including the musculature, breathing, internal organs, digestive system and proprioception.

Body Psychotherapy sees body armour as functionally identified with the psychological defences. Those with Post-Traumatic stress, anxiety and depression all suffer from different imbalances in the autonomic nervous system. Balancing the Autonomic Nervous system is key to recovery and growth. The story of what happened then, is not so important as how the body/mind legacy is being played out in the present. Nick Totton calls this the engram (2). This is the sum total of our thoughts body sensations behaviour feelings and body signature inherited from our childhood being re-enacted in the present usually outside our consciousness. In the body psychotherapy tradition, these are called character defences or adaptations

What might a Body `psychotherapist do about a perceived character defence? Most have come across clients who are so adrenalized that they talk at the speed of lightning without a pause for breath and never touch their feelings. Alternatively, some may find the intense gaze of the therapist unbearable and become silent and inhibited. One technique is Dynamic Relaxation (also known in Body Psychotherapy jargon as vegetotherapy) in which the client lies down and the therapist gives full energetic attention to the breathing and to what is arising in the client in the form of bodily free association. Another is to use gentle and respectful touch. This can be one of the most effective ways of inducing balance in the autonomic nervous system. The theory is that the client can become so relaxed they naturally drop their defences and allow life energy to flow, balancing the Autonomic Nervous system. This way of being allows us to relax into a deeper level and helps us to stay in the present rather than getting lost in the story. When a client is triggered and adrenalized we as therapists too can become triggered and lose our capacity for thinking and reflection. As psychotherapy is an energetic exchange, slowing down, calming down, touching and grounding will serve both the therapist and the client in activating the relaxation response and take the fight/flight or freeze mode into the ‘Window of tolerance’. This is the term coined by Doctor Dan Siegel to describe normal brain/body reactions as opposed to traumatic reactions following adversity.

Why then is BP different from other forms of bodywork?  The answer is that we make the relationship between ourselves as therapist an explicit part of the work, so we will enquire as to how our client is receiving our touch and our presence.  We will not expect that touch will automatically result in relaxation. Indeed, we will be aware that an invitation to lie down and be touched could be intensely triggering for a survivor of childhood abuse and will be mindful of this when choosing techniques. We are expected to have a full rationale of how, when and why we touch. Touch is fairly taboo within the broader psychotherapeutic community and there is a legacy of fear around the erotic possibility. However, Body Psychotherapists argue that it is safer to touch consciously rather than to let touch become the tempting ‘forbidden-fruit’. Not all body psychotherapists physically touch their clients. We may decide that touch is not at all appropriate. Although we touch with our hands and physical bodies we can also touch with our eyes, voices, energy and presence. We say ‘I feel touched’ when we reflect on how some kindness has penetrated through to a deeper place inside. Body Psychotherapy is a broad umbrella. I trained in the Chiron School of Body Psychotherapy. A different branch is Sensorimotor psychotherapy which focuses on the mindful enquiry into how life history has become frozen in body posture. Sensorimotor psychotherapists do not touch their clients. Other Body psychotherapists influenced by psychodynamic theory may never use physical touch but will be aware and influenced by the energetics of the presence between themselves and their clients.

Touch either physical or energetic goes both ways. I have been greatly ‘touched’ to witness clients who have let themselves be vulnerable enough to let me touch them and to allow their frozen life energy to flow in grief or in joy.  I have been still more touched, to see how the two-way exchange flows between myself and my client. It is really necessary for us to be touched and to be seen to be touched by our clients.