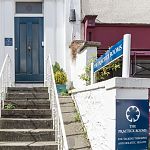 The Transformation of Cotham Hill

I’m the Practice Manager of The Practice Rooms (TPR) in Cotham, Bristol. The centre in Cotham has an interesting history in that prior to it becoming part of TPR family it was one of the longest running complementary health centres in the country, going back to 1981 when it was first established as ‘The Natural Health Clinic’ (NHC). I first joined the NHC 13 years ago, and for several years was its Practice Manager. So becoming Practice Manager of its ‘reincarnation’ as a TPR centre was a fairly smooth transition as the place was very familiar to me, as well as many of the practitioners.

The Cotham Hill location has a lovely feel about it. The street is well known amongst Bristolians for its independent shops, charity shops, and cafes and restaurants - some of the best in town. It also hosts an annual Street Party every Spring which now attracts thousands of visitors. There is a real sense of community among the various traders on the street. It’s also centrally and ideally situated for public transport, right next to the busy thoroughfare that is Whiteladies Road and with a local train station only a few hundred yards away.

When I’m not managing the centre, I am busy with my acupuncture practice. This is based at the centre, so I am in most days which means I bump into most of the other practitioners working there at some time or another. It has become a bit like a second home to me over the years. We have also recently taken over the basement/ground floor (formerly a cafe site) which has created an additional two therapy rooms and a larger, beautiful space for therapists, including a private courtyard garden at the front. It really has transformed the building, making it feel like a whole person somehow, rather like therapy does.

Working for TPR has been a wonderful experience for me. There is a genuine and palpable sense of ethos that pervades the space as well as the team, a clear prioritisation of what really matters, and a heart-centred commitment to mindful practice in everything that we do. People often comment on it when I show them around the rooms - they can feel that quality in the space, tranquility, like a sanctuary for the mind. This quality is held and maintained by our TPR community. Everyone appreciates and respects it, and takes shared responsibility for it.

We also have a real team spirit at the manager level, having regular meetings and get-togethers with all TPR Practice Managers, often working at a deep level through personal things that come up for us in our work. There is a strong feeling of being held and supported by each other. It’s a great thing to be part of, for which I feel blessed.