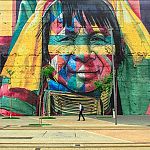 With so much global momentum around issues of racism and equality, it is perhaps timely to explore one aspect that can be part of the Western spiritual community - that of cultural appropriation.

There are some very delicate dynamics and protocols to honour here which distinguish appreciation from appropriation. While no indigenous elder can speak for all traditions, I have seen a general consensus against the following practices being undertaken by non-indigenous people:

My understanding is that cultures are often happy to share some of their wisdom and teachings for use on an individual basis, but not for that knowledge to be taken away and adopted into therapies and ceremonies that are used as part of a business proposition, often without recognition of the original source of the training.

This may be partly why there is a white dominance of the complementary healthcare industry in the West - people of colour are fundamentally uncomfortable with the dishonouring of traditions usurped from around the world.

My hope is that we can honour the traditions of other cultures and be motivated by them to explore our own heritage. We each have a cultural history of spiritual practices, but they have often been lost. There is much to learn from other traditions, but it is easy to take on the teachings of another culture and forget the depths and wisdom of our own. I have just started exploring the gifts of English spiritual traditions and there is so much to learn from the ancient druids, the hedgerow witches, the warrior women, and the seers in our history.

There is often a reason for the subtle nuances in our own culture that we should embrace alongside the teachings of another. We might find that what we think we have taken on from elsewhere was already deeply embedded in our own culture - that was why we were drawn to it, we already felt it within our ancestral DNA. If we can find our own cultural roots in the medicines of our own land, we no longer need to appropriate from others.

We are a long way from that though; I suspect that people of colour see layers of cultural appropriation within our therapy systems as we draw upon all kinds of traditions taken from around the world. We take reiki from Japan, acupuncture from China, shamanism from the Americas, and yoga from India to name but a few. We also import their sacred medicines to use in our retreats, rarely seeking permission from the land and the people who nourished the plant. If we did ask permission, I believe it would often be denied.

Do we fully account for and honour the source of these teachings and practices? I would suggest very rarely. We pay to train, for goods, but do we check that the money is finding the people who most need it in that originating culture? Do we check the chain of reciprocity at all?

When we do appropriate some aspect of another culture, there is also the risk of dishonouring it in the way we adjust the teachings to fit our own traditions. It is easy to take the essence of something very sacred and then pull it to pieces.

For example, I am sensitive to the way yoga has been taken on in the West. It is an incredible practice, but I have experienced its appropriated shadow where it has been amalgamated with some sort of noisy aerobics routine. It felt as though the purity of the traditional yoga was too slow and deep for this class, so it had to be westernised, with super-fast transitions between the postures and loud, upbeat, background music. This felt very uncomfortable to me like we had taken something very sacred and converted it into a format that our busy, adrenalised, western minds could cope with.

For me, there are several key requirements to avoid the label of cultural appropriation:

Given or taken? - So much has been taken by force in our history. The people with the power have taken what they wanted, whether teachings or material goods. Sometimes there might appear to be an agreement, an exchange of some sort of protection offered, but this invariably conceals a hidden imbalance, an oppression somewhere within.

Has credit been given to the originating culture? If we are promoting or using a practice from another culture, we need to acknowledge where it came from. This honours the lineage and keeps the tradition pure, a reference point for anyone looking to explore the original teachings.

Is there an audit trail of reciprocity? - In indigenous cultures, it is possible to offer a service as part of the smooth running of that community, with no need for remuneration because what you give with one hand you receive with another.  In modern Western societies we have adopted the medium of financial exchange to honour someone's contribution. It is therefore hard to say to someone that they should not charge for a spiritual practice or ceremony when society will not support them with their own needs by reciprocating the service. Can you imagine a council gardener going into a supermarket asking for free goods because they have maintained the lawn outside? It's just not the world we live in.

I do, therefore, feel that it is harsh to prohibit therapists for charging for their practice or ceremonies, assuming they have permission from the originating culture to practice in the first place. We often hear about the ceremony being provided for free with a charge made for the facilities or the teachings given in advance of the ceremony. It feels a bit like semantics to me, the bottom line is that remuneration is being given in exchange for that overall service.

For this to stay in balance, there needs to be some reciprocity back to the originating culture, alongside receiving permission and giving appropriate recognition.

This article is an abridged extract from Andrew's upcoming book 'Heal your Past, Free your Future -  The essence of personal healing and 12 keys to help you find it'. It is due out later in 2021, if you want to receive notification of when it is ready to order, please register on one of Andrew's website: