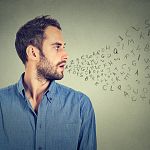 Human communication is a dynamic and complex process that is instrumental to every facet of our lives. It is not until we lose aspects of it that we become aware of its importance.

Aphasia is a complex language disorder resulting from neurological damage to the brain such as from a stroke or head injury. It can affect a person’s ability to talk, write and understand spoken and written language, whilst leaving other cognitive abilities intact. Aphasia affects each person in its own unique way and it is not indicative of low intelligence.

Imagine books in a library suddenly being thrown off the shelves into disarray; when you need a specific book it takes longer to find it.  This is how it is for a person with aphasia to find words. There is ‘the tip of the tongue’ feeling. You might have experienced that feeling when trying to recall the name of an actor in a film. You might be able to see the actor in your mind, describe the actor’s appearance - you may even know the sound that their name starts with, but you just cannot find the word.  People with aphasia often experience this feeling when trying to name everyday objects.  Understandably this can result in them feeling frustration, anger, sadness and shame.

Some key tips for communicating with a person with aphasia: