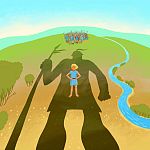 Bullying: a hard one to tackle

Bullying. Not a glamourous subject. And yet, sadly, a familiar one. I am yet to meet an adult who has not been bullied in some way, at some point during their life. More controversially, I am also yet to meet an adult who has not been a bully at some point in their life. School environments seem to bring out the bully in many people. A sort of testing ground or culture well suited to the growth of bullies. Perhaps the brutality of the British educational system until relatively recent years, where teachers routinely assaulted children in the name of discipline, has something to do with this.

I have perhaps been luckier than most, as the main bully I remember having at school was a somewhat ineffective one. He was very keen, but lacked many of the crucial attributes to really thrive at bullying. He was my age and slightly shorter than me. His legs were thin and he lacked the upper body brawn to be physically intimidating. He stuck out his lower jaw and frowned a lot. But his heart didn’t seem to be fully in this display of teenage gurning. Granted he had a big mouth which could make a lot of noise. He could have given Stephen Tyler a run for his money in a melon sucking, or hurting the eardrums of a stadium full of people contest. However, what came out of my would-be bully’s gob was rarely calculated, pre-planned or subtle in any way.

It was my first week at a new school. My would-be bully had been there most of his life and had some turf to defend. I felt nervous about not knowing anyone and self-conscious about being the odd one out. My bully was not a complete beginner and had a dawning ability to sense these psychological vulnerabilities. As our maths class was settling into our seats my bully fired a few opening salvoes at his standard-issue foghorn volume.

“You’re a wanker. You look weird,” he said, smiling at me. “When you are older people will just laugh at you.”

There was a tense silence. The class and teacher waited to see how the new kid would respond.

“Do you mean, like a comedian?” I asked him.” Confusion spread over my bully’s face. A few people were laughing now. My bully seemed wrong-footed. People were supposed to laugh at me when I was older. Not now. There were imaginary years of pain being short-circuited here.

“Oh,” he said and started rummaging in his pencil case and whistling half under his breath. Over the next few days, he tried again. But having got off on the wrong foot, he just couldn’t seem to get the hang of it. The whole bullying thing just wasn’t clicking and always seemed to veer off in an unexpected direction. Like the rubber bands he tried to fire at me in chemistry. A few weeks later he sidled up to me during lunch and negotiated a wary truce. No one must know, he told me, that he actually thought I was alright, even if I looked a bit weird and wasn’t part of the in-crowd.

Sadly, most bullying is more successful. Therapists are likely to encounter lots of bullies because their clients have usually had a few. Therapy can be a relatively safe place to bring and explore these experiences, from relatively mild, yet painful bullying, to systematic intimidation, violence, and intergenerational trauma. Where does one draw the line when it comes to bullying? Unchecked bullying leads to harassment on increasingly large scales, followed by violence and in extreme cases the annihilation of a people. Genocide seems a long way from subtly using power to exert control over others, like the time I used to chase a smaller boy around the playground, to my delight and his terror. But the lines of connection are clearly there once we continue down the path of seeking power over others and using them as a vehicle to project anything unpleasant onto, that we don’t wish to look at too closely in ourselves.

Perhaps what is most disturbing about bullying is how easy it is to speak about being a victim and how very difficult to explore one’s own role as a bully. Is bullying harder to see and accept if you are the bully? And how often do we give tacit support and/or turn a blind eye to bullying? I suspect it’s not just me that has this sinking feeling sometimes that I could have spoken up. I could have reacted a bit quicker, been a bit more courageous. And yet, how often is it that simple?