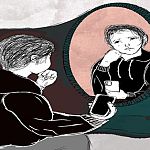 In 2018, clinical guidelines for therapists and other psychological practitioners were expanded to include complex PTSD (CPTSD) as a new framework for understanding adults, adolescents and children who have experienced prolonged, repeated, or multiple forms of trauma involving interpersonal violation*. I regularly work with clients for whom the prolonged, repeated forms of bullying they experienced at school – and sadly, all too frequently, also in their childhood homes - involved interpersonal violation and could arguably be considered as a catalyst for the experiences later in life that this latest definition of complex PTSD describes.

Complex PTSD, as it is currently understood, consists of six symptom clusters - the three clinical hallmarks of PTSD:

It is these disturbances in how someone might relate to themselves that highlight the devastating impact trauma related to bullying can have on a person’s self-concept. This includes levels of self-esteem, self-confidence, self-worth, and how isolated a person might feel. It can include how willing and able someone might be to trust others even years after the bullying may have ended. The current conceptual framework of CPTSD includes these interpersonal factors plus additional ‘resource loss’ factors. Namely, the loss of emotional, psychological, and social resources that might otherwise help mediate traumatic stress reactions. Arguably, the accessibility of even one critical, positive resource during the lifespan of a complex trauma experience can influence the extent to which a person is able to heal emotionally, improve their negative self-concept and gain some degree of acceptance.

Harry is an affable and articulate man in his early 30s. He describes a childhood during which his mother would be shouted at by his father, with things such as plates thrown at her on an almost daily basis. Harry and his siblings would hide upstairs and, when the argument was over, would emerge to find their mother, usually in tears. Nothing was said: the broken crockery was cleared away and life continued until the next inevitable explosion from their father. This situation would be bad enough for a young child to deal with so consistently yet, unfortunately for Harry, he describes the situation at school as far worse.

During her TED talk 2013, Dr. Kristen Neff suggests that the epidemic of bullying in western society has much to do with the extent to which our society teaches individuals to feel a sense of self-esteem. In many other, more collectivist societies such as those in Asia, positive affirmation comes from a societal sense of group cohesion. In the west, self-esteem is often translated to mean an individual should always try and be on top. Winning and coming first are positioned within our schools from the earliest years as something to continually strive for. Within social groups, keeping – or at least being within striking distance – of pole position necessarily means that someone else must be below you in the ranks. For those who feel insecure about their own position within a volatile social situation, such as that in an inner-city school where physical violence is a fact of life, the experience of those outside the ‘in-group’ can often be encapsulated within the complex PTSD definition above.  Wanting to be part of the ‘in-group’ is hard-wired into our DNA and something that, back in our evolutionary past, might have meant the difference between the group including you in whatever food was available and allowing you into the shelter. In other words, survival. Therefore, for us as a species, to be even threatened with exclusion can feel problematic on many overt (and deeper covert) emotional levels.

For Harry, school was a daily torture to be survived. He regularly endured harmful physical and emotional interactions including ritual humiliation designed to intimidate, promote fear, and exact complete submission. “Some days,” he says, “I just couldn’t face it and would wake up and think: “I just can’t do this today.” Occasionally, Harry would fight back but this just resulted in receiving a terrible beating alongside the humiliation of being beaten and leave him further outside the group tormenting him.

Harry’s one and only refuge was the library. In this space, if he could get to it unimpeded, lay hope. Worlds existed in books that were different from his own. This was emotionally nourishing but critically for his growing brain, Harry’s engagement with reading would certainly have formed neurological pathways associated with positive ways of existing and interacting.

Although still scarred by his experiences and working hard to come to terms with what has happened to him, arguably, Harry’s tenacity in giving himself an avenue of comfort and escape will have helped to ameliorate the worst effects of complex PTSD. Others are not so fortunate: their life experiences might mean that they do not have the capacity to immerse themselves in an escape such as reading because their sense of threat is too intense. All too often an escape is found but it is into a netherworld of psychotic relating. Much has been written about the link between psychosis and complex trauma but so much more needs to be perhaps appreciated and understood.

Nicole George is a psychotherapist working online, in London and Exeter (www.nowyoutherapy.co.uk)