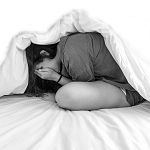 After a good night's sleep, you should feel rested physically but also calm and more centered emotionally. However, if you are sleep-deprived you may have noticed feeling more agitated, anxious, or even depressed. You're not alone in this and it's more than just anecdotal evidence. Sleep deprivation, and the resulting change in our emotional states, have been researched using MRI scans to observe changes in brain activity.

In a study (1) with healthy young adults, one group was allowed to have a full night's sleep and the other was kept awake all night. The next day they were shown various images graded from neutral in content to potentially threatening. The group which had no sleep showed a 60% increase of activity in an area of the brain called the amygdala whilst viewing the images. The amygdala is responsible for triggering feelings of anger or fear and is connected to our fight or flight response. Further studies showed that the reason for this was a decoupling of the amygdala with our prefrontal cortex which normally puts a brake on our emotions.

All this might seem a bit academic initially but if you consider the consequences then getting enough sleep appears to be essential for our emotional health. For example, adolescents, who have disrupted sleep are more likely to have suicidal thoughts, attempt suicide, and commit suicide after the disrupted sleep days. This is not to imply that sleep deprivation necessarily causes these outcomes but can be a contributing factor due to the overactive amygdala and the resulting negative emotions.

Many other psychological conditions including PTSD, schizophrenia, and bipolar disorder are associated with, but not caused by, poor sleep.

There is good news, however, regarding mental illness and sleep. Researchers have been able to reduce the severity of these conditions and reduce remission rates by using sleep as a therapeutic tool to improve sleep quality.

On a personal level, if I have had a bad night's sleep I am aware that my state of emotional arousal may be higher than usual; I therefore take care to be mindful of any hasty emotional conclusions I may come to in social situations. I also allow my meditation practice to be not a replacement for lost sleep but another way to reconnect my higher brain centers to the emotional brain, thus putting back the braking system on the over-arousal.

Daniel Kronenberg is a Clinical Hypnotherapist based in Bath and Salisbury. He also recently trained as an Adult Sleep Coach.