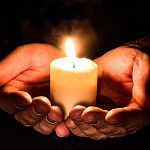 Pause for Thought by Angus Landman

I think this will be seen to be a truly epoque defining moment in human history. Are we ready to take advantage of it?

What else I wonder might have caused us to pause in this way? Seems to me that this relatively harmless virus (“relative” in the global not personal sense) has given us collectively the opportunity to stop and for this one brief precious moment, given us the possibility to reimagine ourselves, to alter course, to re evaluate what’s most important.

What else could conceivably have managed to stop us in such a way? Certainly no political initiative, no Extinction Rebellion, no goodwill patrician gesture. War would certainly have galvanised people but in opposition to each other. It seems to me only a natural disaster and the nature of that disaster being global would need to be so threatening as to cause mass panic and annihilation.

No, here, now, whilst on pause, we collectively have the most amazing opportunity to reflect on how we want to go on inhabiting this planet and how we want to treat each other.

What is different about this “collapse“ is that it is bottom up rather than top-down and so it’s not simply a question of pouring money in at the top. In normal circumstances power comes from the top down and so long as the bottom is fed and watered ( “bread and circuses” for the Romans) the status quo can be maintained. Right now, that is not the case and the bottom has the power to collapse everything that depends on it.

The politicians of course are scrabbling, as they should, to resolve the issue and “business as usual”, get back to how it was before, but the question is if we don’t pause long enough to reimagine ourselves this time, how bad will it need to be next time?

“The Clap for the NHS” echoing other similar initiatives across Europe demonstrates for the first time in human history the bottom cooperating in this way. The remarkable collective action was not initiated by a charismatic leader, or validated by media or authorised and sanctioned by anybody. It was nothing less than an outpouring of love from the bottom up. Here now we have the opportunity for this foundational and fundamental change. Inconceivable two weeks ago, a real opportunity now.....but can we take it? Are we ready? If not now when...if not you who?

Of course our first instinct is to want to “get back to normal” as quickly as possible “get back to safety” but was the world prior to this,  how we really see ourselves? Really? Yes, we had a seemingly infinite choice of coffees and milks and “stuff” at our fingertips but where was the “meaning”?

This was the capital driven merry go round that we were all on, mostly seduced by, and impossible to get off. How was it ever going to stop as it gathered speed taking more and more with it and turning what started out as a “merry” idea into some greedy whirlwind that few of us could get off let alone stop! Yes we could see the signs particularly when we looked in the mirror of our planet and witnessed the abuse, but we were all caught in it in our different ways.

Now we have stopped and the pause button has been pressed. Now we have this moment to ask deeper questions of ourselves. Who are we? What’s most important to us? What would we like the future, our future, our children’s future to look like?

The streets teeming with people clapping,.. .love….or retreat into bread and circuses….fear? And the next time how much worse will it need to be?