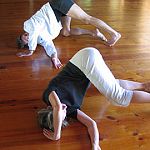 Learning To Play, Playing To Learn

As an adult, when was the last time you played? Perhaps you engaged in a sport or practised a musical instrument, but did you feel that there were rules you had to follow or goals that you had to achieve? When did you ignore the rules, forget about the end result, and indulge in a sense of joy and freedom from moving without purpose? In short, can you connect with your inner child?

The word “play” or “to play” is interesting in itself. The standard dictionary definition of “play” is to “engage in activity for enjoyment and recreation rather than a serious or practical purpose” (Oxford Dictionary). As adults, do we feel that “purposeless play” is worthless and something a grown-up shouldn’t do?

A key ingredient of play is enjoyment, but it does have a practical purpose – whenever we play, we learn. Play and playfulness stimulate curiosity and exploration as well as developing confidence and a sense of self. In our early years, we explore our world through curiosity, each new experience building motor skills and coordination. When we associate a movement with pleasure, we are motivated to repeat it. A baby experiences pleasure through sucking in milk, so repeats that action when s/he discovers a finger or toe. That first experiment of bringing the hand to the mouth is the start of coordinated movement and was prompted by pleasure and curiosity.

As a child, I learned to play the piano, but I had a strict teacher who gave me many boring exercises to do to improve my “playing”. Playing the piano very quickly became a slog, endlessly going through scales. Further, the notion of playing the piano had an expectation of playing the piano well. Mistakes were frowned upon as there was a set way of reading music and reproducing a classical piece. As a teenager, I hung out with other kids who had not had the luxury of lessons but had simply picked up an instrument and found a tune. How I envied them!

For artists exploring their creativity, improvisation can open many doors and take down blocks and barriers. Improvisation means a lack of rules and can be intimidating – but improvisation is our earliest learning and the link to creativity. However, many adults carry around an internal critic, a “cop in the head” who is constantly warning of the danger of failure.

Too often, that cop in the head tells you: “you're no good at this, why are you bothering?” For little children, that cop doesn't exist; there isn't a self-critic sitting with the baby saying: “you really aren't rolling that ball properly”.

Of course, infants understand that an attempt can be unsuccessful. Watch a baby reach for something s/he can't get and you will also see them try different ways to attain their goal. When young, we have an innate sense of curiosity; attempting, trying things out, and experimenting without that fear of failure that seems to haunt us as adult humans.

Some years ago, I worked with a client who was having difficulty with balance and coordination. She came to me initially because she wanted to improve her movement range; although she was very active and a keen yoga practitioner, she had always struggled with her ability to coordinate and balance. During our investigations together, she told me that as a child she had not climbed trees, jumped, skipped, or done any of the slightly “dangerous” activities that many children enjoy. She had never walked along a wall or a balance beam, swung from a rope, or jumped in puddles. The reason for this was her overly anxious parents who didn't want her to hurt herself or catch germs. Each time she went out to play, they warned her: “be careful, you might hurt yourself, be careful you might fall, be careful you will fall”. This constant emphasis on danger had an influence on her: it made her fearful of play from a very early age.

As a Feldenkrais practitioner, I often help people with these issues by encouraging them to replicate their early movement learning, such as crawling and rolling. By exploring our first movement experiments, we often unlock the obstacle that is preventing the adult from doing what the child would find natural. So, with this client, I explored the basis of early crawling, which is lying on the front and softly moving opposite arms and legs. She found this not only physically difficult but emotionally challenging, particularly as she did not connect movement with emotion. When I encouraged her to find ways of rolling and crawling without strain or effort, she began to laugh happily with a renewed sense of self-confidence.

When we play, we have access to a vast physical and imaginative country. Even when space is limited, imagination can make us free. Thus, a bunk bed can be a pirate ship, a castle, or a coach and horses. Play teaches us to exist in many dimensions, not just by walking upright on the ground. By climbing up, going down, rolling on the floor, and jumping high in the air, we expand our understanding of possibility and that not everything is black and white, win or lose, but there are many shades in between.

In a Feldenkrais lesson, we encourage people to explore different movement patterns, sometimes moving in unfamiliar ways. We avoid the word “try” as this implies effort and strain and instead, we frequently say: “explore this, play with the movement”. Using the word “play” immediately gives a sense that experimentation without boundaries is allowable and that there is no right or wrong way to move. For adults, this sense of freedom can feel extraordinary.

Creative experience is where we learn and most importantly, change. Evolution is a series of mistakes or as Moshe Feldenkrais stated in his case study A Case of Nora: “Learning is turning darkness, which is absence of light, into light. Learning is creation. It is making something out of nothing.”[1]

For more information on my work and on The Feldenkrais Method, please visit my website: www.themindfulbody.org.uk